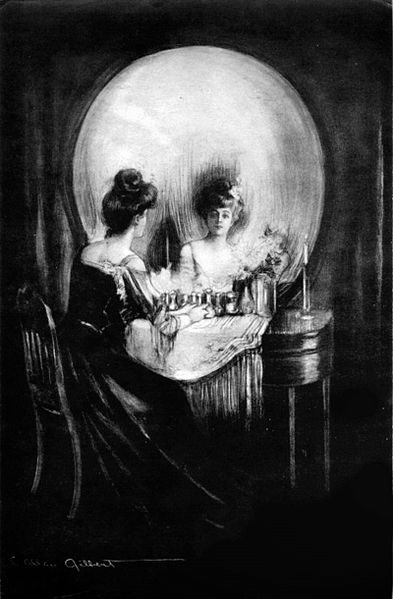 In my OLW research, I discovered Mary Coleridge, a Victorian-era poet and great-great-niece of Samuel Taylor Coleridge, and her poem “The Other Side of a Mirror.” From what I’ve found about her online, it appears she published little of her work during her lifetime, never married, and is regarded as one of the best female poets of her time. After her death, her work was published to great praise. Overall, her novels and poems are reputed to be melancholy, to frequently include references to the supernatural, and to defy social conventions of her day.

“The Other Side of the Mirror” is interpreted by some as a contrast between the “angel woman” expected to be on display by proper Victorian women and the “monster woman” she suppresses, a writer who chafes at the cultural belief that creative pursuits are the domain of men. What do you think?

The Other Side of a Mirror
By Mary Coleridge
I sat before my glass one day,
And conjured up a vision bare,
Unlike the aspects glad and gay,
That erst were found reflected there—
The vision of a woman, wild
With more than womanly despair.
Her hair stood back on either side
A face bereft of loveliness.
It had no envy now to hide
What once no man on earth could guess.
It formed the thorny aureole
Of hard, unsanctified distress.
Her lips were open—not a sound
Came through the parted lines of red.
Whate’er it was, the hideous wound
In silence and in secret bled.
No sigh relieved her speechless woe,
She had no voice to speak her dread.
And in her lurid eyes there shone
The dying flame of life’s desire,
Made mad because its hope was gone,
And kindled at the leaping fire
Of jealousy, and fierce revenge,
And strength that could not change nor tire.
Shade of a shadow in the glass,
O set the crystal surface free!
Pass—as the fairer visions pass—
Nor ever more return, to be
The ghost of a distracted hour,
That heard me whisper: —‘I am she!’

10 thoughts on “Poetry Friday & The Other Side of a Mirror, by Mary Elizabeth Coleridge”