The chicks are two months old this week! Considering the snow that arrived along with them, the tall clover they are enjoying now is a boon.

From their journey in a cardboard box to their early days in the horse trough in our garage, out to the “poultry palace” and beyond, Mark and I have learned a lot and had so much fun.

For example, I had the day off on Good Friday, and the weather was fine, so we decided to “let them out” into their fenced yard for the first time. They were old enough, and we figured they’d be eager to explore new territory.

Wrong. We had chicken chickens. I could not coax them out, even with their favorite treat. Mark finally “shooed” them out so we could sweep out their bedding and put down fresh pine shavings.

Once outside, they wouldn’t venture far from the coop. But once they figured out how tasty clover is, they stripped the stems bare in 2 weeks.

While I was out of town working, Mark built them an outdoor “salon” with space to roost and dust bath under a slanted roof. They love it out there! 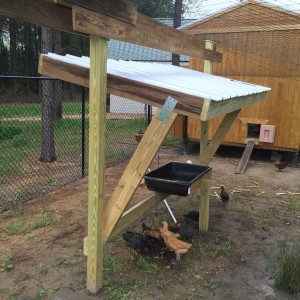 One night we let them free range outside the fence while Mark worked on a watering system. He also installed a swing. All that we lack is a pressure regulator on the watering system and cages to protect the four plants he added that are supposed to be unappealing to chickens. Because they like them.

But they LOVE dried meal worms, and come running when they hear anyone shake the bag. One — a speckled Sussex — will even jump up on my leg if I sit out there and eat treats out of my hand. Yes, she is my favorite. No, I will not buy a chicken harness to take her for a walk. No matter how many people post it to my Facebook wall.