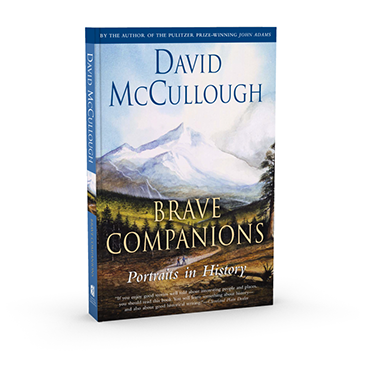 “I feel sorry for anyone who misses the experience of history, the horizons of history. We think little of those who, given the chance to travel, go nowhere. We deprecate provincialism. But it is possible to be as provincial in time as it is in space. Because you were born into this particular era doesn’t mean it has to be the limit of your experience. Move about in time, go places. Why restrict your circle of acquaintances to only those who occupy the same stage we call the present?” — David McCullough

David McCullough‘s Brave Companions is a collection of essays and articles, some of which were previously published in such noted magazines as Life and Smithsonian, that draws readers into a wide range of experiences. From incredible feats of human accomplishment, such the building of the Panama Railroad, to a single day spent with a noted photographer, McCullough brings to life some of American history’s most recognizable names: Harriet Beecher Stowe, Frederic Remington, Theodore Roosevelt. He captures the literary facet of the early pilots — the Lindberghs, Antoine de St. Euxpery, and others, along with the wonder and glamor of those early days of flight. He also testifies on behalf of those fighting strip mining in Kentucky, and begs college graduates at one university to travel the world as well as to travel through history. Many of the people and events covered in these chapters are also the subjects of his numerous books.

McCullough has won numerous literary awards for his work — the Pulitzer (twice) and the National Book Award (twice), and even the Presidential Medal of Freedom. It’s easy to see why. His writing ability is exceeded only by his skill at placing the reader in the time and place through careful incorporation of detail, carefully researched facts, and storytelling. While academics criticize his tendency to create narrative and play to popular audiences, McCullough makes history accessible to the average reader. I felt like he can’t help but be fascinated with all of the historical characters he writes about, and he wants to share that joy with as many people as possible.

The chapter, “Washington on the Potomac” is a love letter to America’s capital, along with a recommended reading list. His passion for the Library of Congress, and its role in shaping his career, made me wish I was a historian.

At 82, he’s still publishing and making public appearances. He’s filmed a variety of videos, and is as engaging on video as one believes he would be from reading his prose. I’m particularly fond of his video tribute to librarians. He has a new book out, The Wright Brothers. Not one to be idle, he’s also an avid painter and traveler, plus he has 19 grandchildren.

This is the first book from my Friends of the Library Project I’m not willing to give away. I’ve turned down corners to mark books he recommends or ideas to research. I highly recommend you find it — his books have never gone out of print so it should be available.

Have you read any of his other books? If so, please share your thoughts in the comments.

My other two FOLP reviews are here and here.