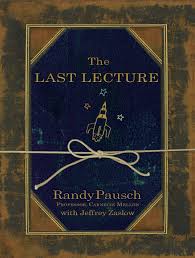 If you need a bit of inspiration or encouragement coupled with a kick in the pants, The Last Lecture by Randy Pausch will do the trick.

Originally a filmed lecture that became a viral sensation, the book expands on theme he touched on in his speech at Carnegie Mellon in 2007: achieving your childhood dreams.

The premise is simple: the incredibly intelligent and charismatic professor was diagnosed with pancreatic cancer, and invited to deliver a “last lecture,” which originally was designed to get professors to consider their mortality and offer them an opportunity to distill their most important messages into one lecture. In Pausch’s case, his impending death was not hypothetical, but sadly real. His life was amazing in many respects, and one can only wonder how much more he would have accomplished had he lived longer.

The book is a love letter to his parents, whom he credits with encouraging him to pursue his dreams; to his wife, who was the love of his life; and to his children, who made his death all the more tragic given their young ages, but who inspired him to deliver the last lecture. It’s also a tribute to his students, mentors, and colleagues. He readily shared credit for his success, the sign of a truly great leader.

The book is also a reflection of his life philosophies (have fun, be self-aware, overcome obstacles so you have a reason for self-esteem) and practical advice (write handwritten thank you notes).

To say Pausch was intelligent is to say the ocean is vast. That he was also creative and dedicated to bringing along as many people as he could into academic programs where they could fulfill their potential and learn to be effective humans speaks to me greatly as a former educator.

This was a book I didn’t want to put down. The website maintained by Carnegie Mellon includes the original video as well as a lot of other information, including a tour of his childhood bedroom (which he painted with all sorts of designs while he was in high school), the continuing work related to his programming software Alice, and a memorial bridge built on campus.

If you are interested in this copy, leave a comment and I’ll draw a name if there’s more than one person interested. 😉 If you’ve read it, please share what you thought in the comments.

Other FOLP (Friends of the Library Project) reviews are here, here, and here.

2 thoughts on “FOLP #4: The Last Lecture, by Randy Pausch”